Who Do You Want to Go With? [Trust System] 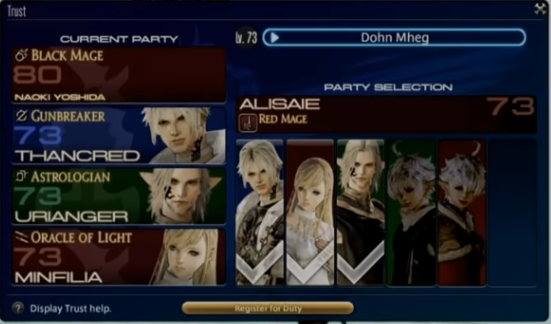 This article is about characters of NPC who can go with dungeons by the Trust System.

Spoiler Alert
This article is included main scenario from Heavensward.

The article of the Trust System is here.

About the Trust System

Job: Gunbreaker
It will express his distress and his private self that has not described before.
He was naked but he could come back alive on patch 3.0 through his survival instincts…it might be:P
The reason of his looks is changed from patch 4.X, it will be clear from main scenario.

Job: Astrologian
He is fond of the First more than others because he sent Minfilia to the First until patch 3.4.
He is one of the key of main scenario.

Job: Scholar
It’s not too much to say that he is another hero in FF XIV.
He has really grow when we met first.
I want to go easy on him catch a glimpse of his effort.

Job: Witch
She was called “Matoya” in the trailer, the reason will describe from main scenario.
It will dig deeper so we can see the other side of her that we’ve never seen.

Job: Red Mage
Alphinaud is her twin brother.
She is chasing after the Warrior of Light.
She tend to dash to enemies in dungeon, so she will often knock down tread AoE.
If healer is Alphinaud or Urianger, it will be interesting to see how fast to heal her because they cherish her.
And if the Limit Breaks is charged, she use it immediately.

I introduced the members who can go with dungeons.

It might to be fun to go dungeon with players at the first time,and go with your favorite NPC as leveling.

I’m happy if this article is helpful fro someone.